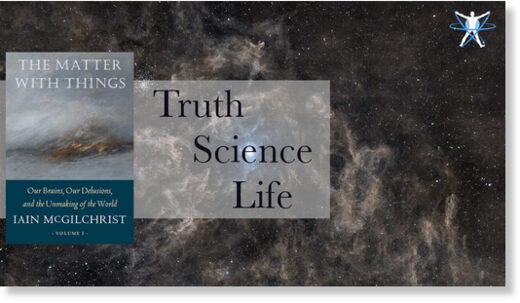 Today on MindMatters we discuss three chapters from Iain McGilchrist's magnum opus, The Matter with Things. What is truth? What is science's role in discovering it? And what does a proper science of life look like? Join us as we plumb the depths of McGilchrist's bold vision on some of life's biggest questions.

Harrison Koehli co-hosts SOTT Radio Network's MindMatters, and is an editor for Red Pill Press. He has been interviewed on several North American radio shows about his writings on the study of ponerology. In addition to music and books, Harrison enjoys tobacco and bacon (often at the same time) and dislikes cell phones, vegetables, and fascists (commies too).

Born and raised in New York City, Elan has been an editor for SOTT.net since 2014 and is a co-host for MindMatters. He enjoys seeing and sharing what's true about our profoundly and rapidly changing world.

Adam joined the editorial team in 2014 and is a co-host of MindMatters. His particular interests include philosophy, history, exercise science, and technology. He particularly dislikes Critical Race Theory and people who're so afraid of death that they prevent others from living. He also knows kung fu.