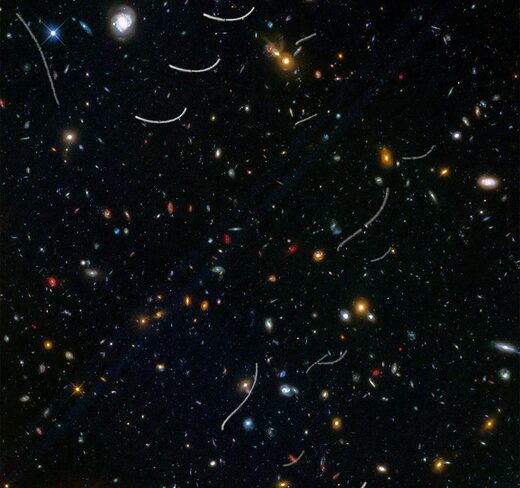 Researchers have found over 1,700 asteroid trails in archived Hubble data from the last 20 years. While many of the asteroids are previously known, more than 1,000 are not. What good are another 1,000 asteroids? Like all asteroids, they could hold valuable clues to the Solar System's history.

As time passes and more and more telescopes perform more and more observations, their combined archival data keeps growing. Sometimes discoveries lurk in that data that await new analytical tools or renewed efforts from scientists before they're revealed. That's what happened in an effort called the Hubble Asteroid Hunter.

In 2019 a group of astronomers launched the Hubble Asteroid Hunter. It's a citizen science project on the Zooniverse platform. Their goal was to comb through Hubble data to find new asteroids.

The astronomers released the results of their project in a new paper titled "Hubble Asteroid Hunter I. Identifying asteroid trails in Hubble Space Telescope images." The study is online in the journal Astronomy and Astrophysics. The lead author is Sandor Kruk from the Max Planck Institute for Extraterrestrial Physics.

"One astronomer's trash can be another astronomer's treasure," Kruk said in a press release. The data they searched for was largely discarded from other observational efforts not focused on asteroids. In many cases, the data would have appeared as "noise" and was removed to make different elements stand out. But all of this secondary, unexamined data is still archived and available. "The amount of data in astronomy archives increases exponentially, and we wanted to make use of this amazing data," said Kruk.

The project examined more than 37,000 composite Hubble images. They were taken between 30 April 2002 and 14 March 2021 with the Advanced Camera for Surveys and the Wide Field Camera 3 onboard the Hubble Space Telescope. Most images are 30-minute long exposures, so asteroid trails appear as curved streaks. 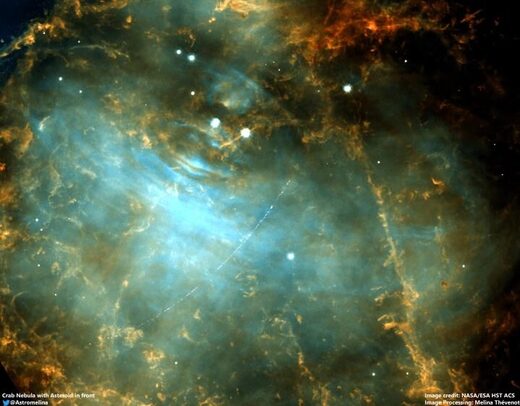 The streaks go to the heart of the problem: computers struggle to detect them. That's where the Zooniverse platform and citizen scientists come in.

"Due to the orbit and motion of Hubble itself, the streaks appear curved in the images, which makes it difficult to classify asteroid trails - or rather it is difficult to tell a computer how to automatically detect them," explained Sandor Kruk. "Therefore, we needed volunteers to do an initial classification, which we then used to train a machine-learning algorithm."

The volunteers delivered. 11,482 citizen scientists took part in classifying the images. The Hubble Asteroid Hunter page at Zooniverse had over 2 million clicks, and the volunteers provided 1488 positive classifications in about 1 % of the images. 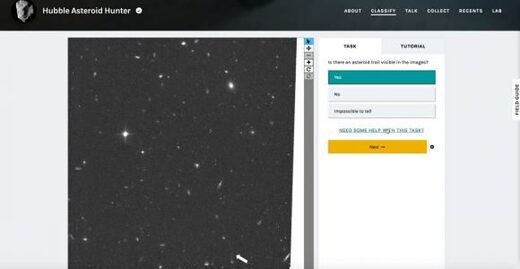 The work of the citizens who took part trained a machine-learning algorithm to search the rest of the images quickly and accurately. The algorithm exists in the Google Cloud, and once it was trained, it contributed another 900 detections for a total of 2487 potential asteroid trails in the Hubble data.

Then the professional scientists played their role. Three of the paper's authors, including lead author Sandor Kruk, went over the results. They excluded things like cosmic rays and other objects, which resulted in 1701 trails found in 1316 Hubble images. About one-third of them were known asteroids, leaving 1031 unidentified asteroid trails. 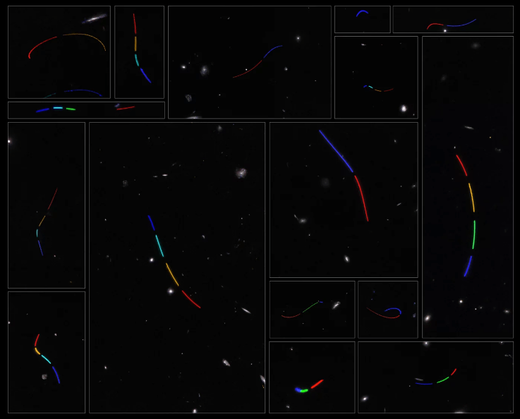 © ESA/Hubble & NASA, S. Kruk (ESA/ESTEC), Hubble Asteroid Hunter citizen science team, M. Zamani (ESA/Hubble)
This mosaic consists of 16 different data sets from the NASA/ESA Hubble Space Telescope studied as part of the Asteroid Hunter citizen science project. Each of these datasets was colour-assigned based on the time sequence of exposures, whereby the blue tones represent the first exposure that the asteroid was captured in and the red tones represent the last.

Follow-up observations will confirm how many of them are newly-discovered asteroids and determine their orbits. Some of 1031 will likely not be confirmed, but the rest will help flesh out our understanding of our Solar System's asteroid population.

These asteroids have escaped detection because they're fainter and likely much smaller than most asteroids detected from the ground. This paper is the first one released as part of the Hubble Asteroid Hunter project. In subsequent papers, the authors will use the curved shape of the asteroid trails to determine their orbits and their distances. 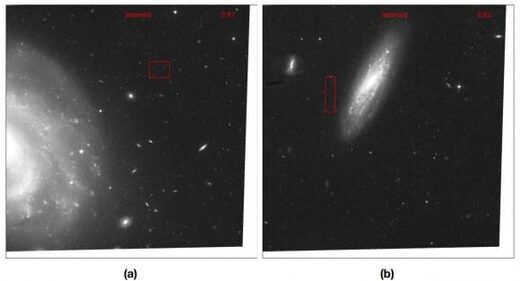 © Hubble Asteroid Hunter
This image from the paper shows two asteroids found in Hubble images by the team’s machine learning tool, called Auto ML. The red numbers in the upper right corners are Auto ML’s confidence classifications for each image.

All asteroids are remnants from the Solar System's early days, mostly from before the planets formed. They're like nature's time capsules, and they preserve the conditions in the early system. That's why astronomers are so interested in them and why we've sent spacecraft to collect samples from asteroids like Bennu and Ryugu.

"The asteroids are remnants from the formation of our Solar System, which means that we can learn more about the conditions when our planets were born," Kruk explained.

© Hubble Asteroid Hunter
This image from the study is a sky-map of the Solar System Objects (SSOs) identified in the Hubble archived images. The blue stars show the identified, known asteroids. The orange circles show the location of objects for which the team did not find any associations with SSOs. The ecliptic is shown in red. The two gaps in this plot correspond to the Galactic plane, which HST did not observe.

More and more researchers are making use of archival data like this. It's economical to scour existing images for new discoveries, and it bears fruit. "The use of archival data produced by imaging campaigns whose primary science goals lie outside the Solar System is common practice in asteroid science. Several groups have used various image archives to find and characterize SSOs." For example, in 2019, researchers used archival images from exoplanet surveys to identify over 1800 asteroids, with 182 potential new discoveries.

Astronomers want a complete understanding of the Solar System's asteroid population because it helps clarify the Solar System's history. "A detailed description of the small bodies in the Solar System puts constraints on the different Solar System formation scenarios, which make concrete predictions on the size and orbit distribution of objects as a function of time," the authors explain. "In particular, both the giant planets' migrations and collisional cascades have effects on the asteroids' size and orbital distributions that could be detectable with specially purposed observational surveys."

But specially purposed surveys are expensive and time-consuming. Observing proposals also face stiff competition from other researchers with other foci. "We instead decided to produce such a survey from a large archival dataset," the authors write.

Kruk hinted at things in the data other than asteroids. "But there were other serendipitous finds in the archival images as well, which we are currently following up." He also said that their approach is a game-changer, and they intend to use it again. "Using such a combination of human and artificial intelligence to scour vast amounts of data is a big game-changer, and we will also use these techniques for other upcoming surveys, such as with the Euclid telescope."

As far as the "... other serendipitous finds..." in the images, Kruk declined to share what those other finds might be. He told Universe Today that the findings are "... not related to unusual asteroids but to other findings in the data. We will report them in follow-up publications and announcements soon, so stay tuned!"