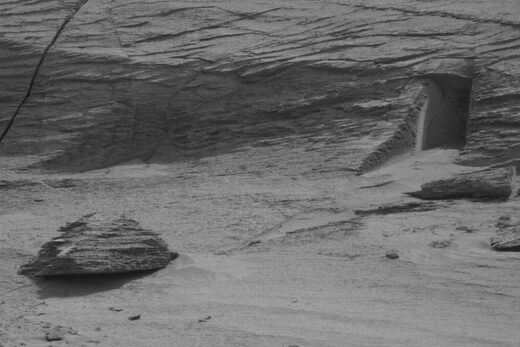 © NASA/JPL-Caltech/MSSS
The image of what looks to be a symmetrical, created Martian portal, captured May 7 by NASA’s Curiosity rover, has ignited a cosmic array of speculation.

It's not a stairway to heaven - it's a doorway on Mars.

The image of what looks to be a symmetrical, hand-hewn Martian portal, captured May 7 by NASA's Curiosity rover, has ignited a cosmic array of speculation, conspiracy theories and dreams of intelligent life on the red planet.

"If you zoom in all the way you can see Matt Damon crouching inside the doorway," noted one wise guy on Reddit.

In reality, "it's just the space between two fractures in a rock," Mars Science Laboratory project scientist Ashwin Vasavada told tech site Gizmodo on Friday, adding "we've been traversing through an area that has formed from ancient sand dunes." Those dunes cement together through the eons, creating rocky outcrops, while shifting sands would reveal different images of the planet's surface over time.

The doorway would have been carved by very tiny Martians: the rocky fracture is only a foot tall, Vasavada said.

His Debbie Downer statement has not dimmed the Martian rumor mill.

"So what if it's only a few inches? How do we know what size our overlords will actually be?" one conspiracy theorist posted on Reddit.

"I think what we have here [is] either two vertical fractures, where the middle piece has been removed, or one vertical fracture, and the blocks have moved apart a little bit," Vasavada said.

The planetary portal is just the latest in a long list of familiar-looking objects space enthusiasts have seen on Mars. Past photos of its landscape have revealed images of spoons, squirrels, campfires and women wearing dresses, Gizmodo reports.